Greyhawk Wiki
Register
Don't have an account?
Sign In
Advertisement
in: Atmospheric deities, Aquatic deities, Gods of travel,
and 2 more

This page may be a Stub or not include some information. For a full article on the topic with citations, please see Procan at Greyhawkonline.com.

The Storm Lord, the Sailor of Sea and Sky, Sender of Storms, Roar of the Ocean, Eye of the Tempest

Procan is the Oeridian god of Seas, Sea Life, Salt, Sea Weather, and Navigation. His holy symbol is a gold and coral trident above or piercing a cresting wave.

Procan is an ancient, primal god. He is wild and tempestuous; he can be benevolent or malevolent at turns, but generally cares nothing for humanity unless carefully propitiated - and perhaps not even then. He's the embodiment of mercurial winds and uncertain fate. He is greedy and possessive of the wealth that comes to his domain, whether from deliberate offerings or sunken ships. He's an elder god, almost like a titan, though he roams the cosmos freely.

Procan is portrayed as a muscular man with blue-green skin and hair. His eyes are golden, glinting like sunken treasure. He carries a large spear dripping with seaweed.

Procan's realm, Seasedge, is located on the plane of Limbo.

Priests of Procan stress the protean and changeable nature of the seas and skies. They portray nature as a harsh, treacherous mistress that Procan can hope to avail against. While Procan can protect his worshippers against doom, they also note that he can help them reap the bounty of the seas. The ocean—and, by extension, Procan—is seen as the origin and destination of all life. 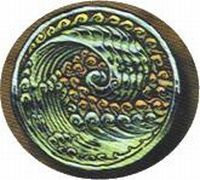 Procan is most often revered in his aquatic aspect, though some inland peoples do worship him as a weather god. Some sentient aquatic creatures, such as merfolk, may also worship Procan.

Clerics of Procan normally live on or near the sea, ministering to fishermen and sailors. Their holy water is made from salt water, but their create water cantrips may call either fresh or salt water into being.

Any port city will have at least a small shrine to Procan. Atirr, the Free City of Greyhawk, Hardby, Irongate, and Sasserine all have temples to the deity. Atirr's cathedral is particularly large. The cathedral of Procan in Ironport in the Sea Barons is famed for its incredible decorations, including arabesques, symbols of Procan, anchors, and chains all carved from stone. In the center is a towering 20 foot high statue of the god himself. The cathedral's walls stand over a hundred feet high.

Procan's services are held on or close to the sea. Gold or pearls are cast into the waters as offerings to the deity, fish and bread are eaten, and the priests pray for their flock's safety at sea.

The Encyclopedia Greyhawkania Index page has a list of sources, abbreviations, and a link to the full index.

Community content is available under CC-BY-SA unless otherwise noted.
Advertisement